Lest you think COVID’s just a problem for the ‘older’ or ‘unhealthy’, take note!
You’d be hard-pressed to find someone with a more nutrient-dense, fit and healthy lifestyle than me prior to my encounter with COVID.
From “lightning” shooting through my veins to blurred vision, GI, and respiratory effects – here’s the rundown of what happened and how I worked my way back to health.
But first things first:
That said, here goes…
In early mid-March, against my better judgment, I attended a weekend-long party in wine country with attendees from around the Bay Area and across the country. It was great fun, but there were notably zero precautions with guests, venues, vendors, etc. In the few short days that followed, the Bay Area went into total lockdown.
That Sunday night upon return, I came down with a blistering migraine, chills, and shakes. I felt better after sleeping-in Monday, though I was coughing and my chest felt tight.  I worried my worst fears were realized. Could this be COVID?!
I sent my doc a note. They said so long as I didn’t also have both a high fever and shortness of breath with the cough, I should be fine. I didn’t have a fever, so soldiered on. The coughing worsened.
I was using a new diffuser to help me ‘breathe’ better but wondered if it was counterproductive. I dropped it, and sure enough, the coughing stopped. Phew – I must be safe, I thought…
In the days that followed, I was a mess of stress. My family in the Deep South didn’t perceive the pandemic to be a threat and likened it to the flu, conspiracy, etc. I couldn’t control their actions and wanted them to stay put at home! I wrote an in-depth article in a near desperate attempt to educate and convince them and others to stay home.
I followed scientific and medical journals – all the incoming COVID research – like a hawk.

Less than one week later – precisely 10 days after my last outer human contact – I awoke in the middle of the night to agonizing pain. I could only describe it as lightning shooting down my forearms and shins – on both arms and legs, all at once. I yelped aloud.
I then felt an odd burning sensation crawling through my digestive tract. I literally felt it move, step by step – as if my body were possessed by an alien. It was surreal.
The next day, I was sitting at the kitchen table when the room started turning, like one big dial. I nearly fell out of my chair and crawled to the bathroom. Loose stools, bordering on diarrhea, persisted for 10 days straight.
(I called the doctor line that night and they said “GI symptoms are not suggestive of COVID. Sounds like a panic attack and anxiety. Try deep breathing and calming down”)
The first 4 of those 10 days were the absolute worst:

Afterward, I was able to eat – mostly broth and yogurt. I sat in the backyard to feel the sun, breathe the air, and listen to the birds.

Late March, the chest tightness returned. My breathing felt constrained. And I was coughing. All the time.

They sent me an inhaler. I was told “so long as you don’t have a high fever and you can breathe, you’ve likely gotten through the worst of it and will be fine. Stay home.”
In April, I was coughing up froth, all day. A spit cup became an unwelcome 24/7 companion – for many, many weeks. (literally 2 months. Talk about gross!)
The coughs started to hurt – a knife-piercing chest pain.
Then came the sore throat. And face pain and more migraines.
I had no fewer than 4 distinct throat infections in under 2 months. (Swollen glands, pain, the whole nine)
Then thrush developed in my mouth. (Thrush?! Wth!)

And then there was a strange clicking in my right chest when I’d inhale.. a ’stuck’ feeling with audible ‘click(s)’.

A sign of pleurisy or pneumonia the doc said. A common COVID ‘post-viral’ situation.

And a separate fierce pain in my chest – intensified by movements like raising my arms, turning or twisting, bending over, sometimes even just breathing. I couldn’t lie back in bed, it was so painful.

Likely pericarditis. Another ‘post-viral’ condition they were seeing.

The chest pains were consistent. As was the brain fog hovering over me.

There was a roller coaster of migraines, sudden extreme fatigue, and chills. They’d come and go – vanishing completely, then cruelly returning with a vengeance – putting swift end to my fleeting victory.
I might feel great at noon, but by 2pm or 4pm, I’d end up in bed for the rest of the day.

Each day was a traipse across eggshells. One misstep could put me right back in bed.

My heart would race with the slightest change in position, with dizziness to follow. Merely rolling over in bed sent my pulse soaring – never mind standing up in the morning. I nearly blacked out a few times.
This was part of the dysautonomia, also common in post-viral syndrome or “long-haul” COVID.
My eyes were red and often couldn’t handle looking at screens. My focus was lacking. I struggled to work 2 or 3 hours a day – ridiculous! Many wished me well in my convalescence. I resisted. This can’t be real!
Through May I was still winded and exhausted by simple things such as walking up a flight or two of stairs. I recall walking up a few steps to the bedroom and pausing to catch my bearings. I was dizzy and out of breath.
Simple conversations could leave me dizzy and breathless – I had to pace myself.

By mid-May, my ability to focus and work was expanding. I had a “window” of near-certain productivity, from 11am – 2pm.

My daily motto was “I’ll run when I can and rest when I can’t”.

And there were well-intentioned family and friends who questioned it all.

“Are you sure there isn’t some sort of psychological thing?”... “I just don’t understand how you can be this ill? Are you bringing this on yourself? And.. “there’s no way you have COVID!”

This sort of “gaslighting” and “patient blaming” is real. I even experienced it from medical professionals early on, until late April when the post-viral syndrome was more widely recognized. Personally, I let the words go past and tried not to mind.

But there is something healing in being validated in your own reality – just as there’s something pernicious in being denied that reality.

(I’ve said nothing of the sheer terror in knowing you might have some new crazy, deadly virus of which much is unknown. I had to get past that early on as well…)

In June, I started questioning my own sanity…

Am I imagining this? Has my body reinforced a new habit of being sick? Is this something I need to bulldoze through?

I resolved to start a garden in the backyard. It would be my own personal victory garden and forcing function to get outside into fresh air most every day.

Slowly but surely, those seedlings and plants emerged – and my energy grew with them. I’d notice a bit more energy as I went up and down our backyard hill to water them.

In July, I found myself bounding up the hill with the full pail of water. I was coming BACK, after all.

I was also able to get back on my bike – albeit indoors on a stationary trainer. While the 30-minute sessions were a slice of what I used to do, I relished every moment.

In mid-August, I had the first long-productive run of work that extended into the next week. It was glorious.

The recent threats of rolling power outages, wildfires, smoke, and air quality have brought some setbacks to my recent comeback.

I’m trying to navigate as calmly as possible and to keep pressing forward.

Here’s to running when you can, for as long as you can.

A few victory garden photos below… 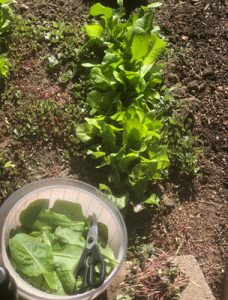 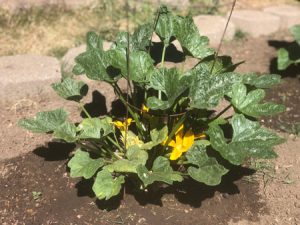 Through holistic nutrition principles, research, and data science, we connect you to delicious organic foods and healthy habits – at home and on the road.

If you haven’t already,  join our Healthy Anywhere community to get blog digests and exclusive email updates. Let us bring you the best, so you can be your best.